This document is reprinted from “Intel:Build a Real Server” section of a Microsoft “How To Technology Fair” handout dated Aug 2000. Updated by Ian Matthews of Up & Running Technologies on August 28 2010 to include RAID 6.


We also have a very simple explanation of SAN, NAS, DAS, iSCSI, FiberChannel updated in November 2016

RAID is an acronym for Redundant Array of Independent Disks. The term was coined in 1988 in a paper describing array configuration and application by researchers and authors Patterson, Gibson and Katz of the University of California at Berkeley.

In the past computer systems were often restricted to writing information to a single disk. This disk was usually expensive and prone to failure. Hard disks have always been the weakest link in computer systems, because the devices are the only mechanical member of an otherwise all- electronic system. The disk drive contains a mass of moving, mechanical parts operating at high speed. The question is not whether the hard drive will fail, but when a hard drive will fail.  RAID was designed to revolutionize the way computers managed and accessed mass storage of data by providing an inexpensive and redundant system of disks. It was called Redundant Array of Inexpensive Disks (RAID). Instead of writing to one Single Large Expensive Disk (SLED), RAID wrote to multiple inexpensive disks. Originally the name stood for Redundant Array of Inexpensive Disks but has been revised to Independent disks.

RAID accomplishes its goals of redundancy and fault tolerance by doing two things: one is striping and the other is parity checking. Striping means that files are written a block at a time over multiple disks. The striping technique divides data across many drives and improves data transfer rates and total disk transaction times. Such systems are good for transaction processing, but suffer from poor reliability because the system is only as reliable as the weakest individual drive.

Parity checking ensures that the data is valid by performing a redundancy check on all data following a transmission. With parity, one of the disks on a RAID system can fail and the other disks have the ability to rebuild the failed disk. In both cases, these functions are transparent to the operating system. The Disk Array Controller (DAC) handles both striping and parity control.

The major components in RAID are the Disk Array Controller (DAC) and a rank of five disks. The picture below shows an example of RAID-5. Data is striped across all five disks and the parity is used to recover a failed disk. There are many different RAID levels. Some RAID levels are designed for speed, some for protection, and some, like RAID-5 provide a combination of both. We will discuss them all.

In the past a computer would write a file to a single disk. Striping allows you to break up a file and write different pieces to multiple disks concurrently. If you have 5 blocks of data in a file and stripe them across 5 disks, each block would be written to a separate disk simultaneously. If you had 5 OLTP transactions, each containing less than one block, you could process 5 different transactions concurrently.

Most RAID levels stripe at the block level but RAID can stripe at the bit or byte level. The size of the block is determined by the system administrator and is referred to as the stripe depth.

To maximize a disk array subsystem’s transaction processing capabilities, data must be written and read concurrently to and from multiple drives. To accomplish this, blocks of user data are striped across the array of drives. A stripe consists of a row of sectors (a sector consists of 512 bytes) located in the same position on each disk across the width of the array. Stripe depth, or the number of sectors in each data block, is defined by the subsystem software.

Stripe depth directly affects performance in that a too-shallow depth requires the system to execute more I/O commands than are needed. If the specified depth is too large, the processor’s multi-tasking capabilities and the advantages provided by multiple drives and actuators may be negated.

In an ideal transaction environment, each request from the host involves only one drive, allowing multiple concurrent transactions to multiple drives.

The process of striping data to the array drives resolves the problem described earlier of overloading one system drive while another sits idle. Data striping eliminates the use of dedicated drives and ensures that the data processing load is balanced among the available drives, while increasing performance by writing multiple blocks concurrently.

People often confuse parity with mirroring (or shadowing). Mirroring involves the creation of a duplicate copy of a disk. Mirroring is a technique where the data is written simultaneously to a pair of drives. These systems offer excellent reliability and have very good transaction processing results because the work can be carried out by either drive in the pair. The penalty paid is that two drives must be purchased to get the capacity of only one. The overhead of mirroring is 100% or double the disk space. When a disk fails the mirrored disk is used in its place.

Parity provides the same general protection as mirroring, but has less overhead. If a user has an array of five disks, four are used for data and one is used for parity. The overhead is only 20%. This is quite an advantage when cost is a concern.

The picture below shows a RAID disk failure. Once the disk is replaced the Disk Array Controller will rebuild the disk to its previous contents. It will rebuild a 1 and a 1.

The industry currently has agreed upon six RAID configuration levels and designated them as RAID 0 through RAID 5. Each RAID level is designed for speed, data protection, or a combination of both. The RAID levels are:

The most popular RAID levels are RAID-0, RAID-1, and RAID-5. These are described next in more detail.

RAID-0 stripes the data across all the drives, but doesn’t utilize parity. If one of the disks fails, the data must be restored on all five drives from backups. This RAID is designed for speed and is the fastest of all the RAIDs, but provides the least protection.

RAID 0 | Striping with No Parity

The RAID-1 technology requires that each primary data disk have a mirrored disk. The contents of the primary disk and the mirror disk are identical. RAID- I provides for the best data protection, but is slower than RAIDS 0 or 5.

When data is written on the primary disk, a write also occurs on the mirror disk. The mirroring process is invisible to the user. For this reason, RAID- I is also called transparent mirroring, The user can set up RAID-1 to write to a single disk and have that disk mirrored  can stripe to a number of disks with each of the striped disks also having a mirrored copy. This_ is called striped mirroring, RAID 1+0, RAID 10, or some cases RAID 6.

RAID-5 stripes data at the block level and also utilizes parity. With the RAID-5 technology, user information and parity are combined on every disk in the array. Independent and/or parallel data read and write operations are performed. This RAID is the most popular of all RAIDS. RAID-5 is not as fast as RAID-0 and does not provide as much protection as RAID-1 mirroring. RAID-5 provides good-speed and good protection. This is why it is often the RAID level of choice.

Raid 6 is simply RAID 5 with a second parity disk.  In other words TWO drives can fail in a RAID 6 at the same time array and there will be no data loss.  The minimum number of drives required for RAID 6 is four.  RAID 6 became commonly available in 2009.

RAID 1 is mirroring and RAID 0 is striping.  If you build a number mirror set and then stripe them together as one disk, you have RAID 10. 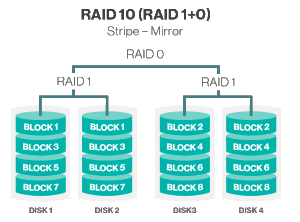 The major components of RAID Disk Arrays are the Disk Array Controllers, 5 SCSI Channels, and one or more ranks of disks. There are usually two Disk Array Controllers (DACs) working as a team. The implementation used to consist of one Active DAC and one Passive DAC in case of a DAC failure. Most implementations today utilize two Active DACs. They both share responsibilities for controlling the disks, but either one will control all ranks if the other DAC should fail. In the picture below you see two DACs. They share responsibility for four ranks. You can configure the disks with any supported RAID level. You can even break up the disks to configure multiple RAIDS within the same rank.

In the past Disk Arrays were exclusively connected to the main computer through a cable and were always in an external box. There is a SCSI length limitation for external Disk Arrays of around 80ft or 25 meters. A repeater could be used for an additional 25 meters but that would result in a five-percent loss in performance.

Many computers today have internal RAID. The CPUs communicate with the disks internally, but the same fundamentals still exist. Whether internal or external, the disk array will have ranks of disks that are controlled by one or two disk array controllers.

We have a very simple explanation of SAN, NAS, DAS, iSCSI, FiberChannel updated in November 2016

Categories: Other TechnologiesWindows Server
Tags: What is mirroringwhat is RAIDwhat is RAID 10what is RAID 5what is striping