SOLVED: What is Windows 10 Pro For Workstations

Windows 10 has many lesser known variants including Windows 10 Long Term Servicing Branch, Windows 10 Embedded and Windows 10 Team.  In the fall of 2017, a new variant named Windows 10 Pro For Workstations will be added to the list.

Windows 10 for Workstations is a high end version of the standard Windows 10 Pro targeted to corporate users with massive workloads.  There are several new features that will only be available in the Workstation option but the only one that counts for most people will be the ability to use 4 physical CPU’s.  Currently Windows 10 is limited to 2 physical CPU’s which, if you consider those CPU’s can each be 20 core Xeon CPU’s, is much more than most power users require.

Less interesting is that it supports 6TB of memory.  We don’t think there is a big market for systems needing more than the 2TB limit on the current Windows 10 Pro… but we could be wrong 🙂

Windows 10 for Workstations will also support ReFS (Resilient File System) which was originally announced for Windows Vista but arrived in Server 2012!  To use ReFS on Windows 10 thus far, you 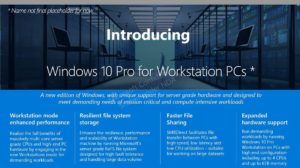 needed to use STORAGE SPACES which is a pain.   It looks like that MIGHT no longer be the case with ‘Workstation’.

It supports ‘SMB Direct’ which will speed up your network file transfers if you have a server grade network card that supports RDMA (Remote Direct Memory Access).

Lastly Windows 10 Workstation looks like it will support NVDIMM’s (Non-Volatile RAM).  This is an ADDITIONAL memory stick you can plug into the latest high end PC’s to augment your spinning disk.  As you can see in our write up from a few weeks ago, we don’t think much of NVDIMM technology as it stands in 2017.  Just buy an SSD and be done.

All of these capabilities will eventually make their way into the mainline Windows versions but for now, as the graphic shows, Windows 10 Pro for Workstations will be interest to those with server grade hardware running massive loads.

[…] but in 2022 Intel added a new Evo standard for Power Users. Mostly people that would use “workstations” in the office, now have the option of H-Series Evo […]